Andy Sheppard and the Pushy Doctors, Get the Blessing – a week at The Bell

What week we had at The Bell in Bath. Monday’s visit by the Pushy Doctors was followed Get the Blessing on Wednesday and my breathless anticipation turned out not to be over heated. Charley Dunlapp’s breathless appreciation of both the Doctors and the bestowers of blessings sums it all up. Gag of the week has to be Jim Barr welcoming back Radiohead’s touring drummer from his ‘apprenticeship with Radio Shack’. Musical moment of the week would be selected from a very long list of nominations. One would be GTBs American Meccano, shorn of Robert Wyatt’s vocal and tweeting birds in the live show, but somehow the quartet manage to make the anthem like hook sound like its being delivered by a massed choir and orchestra – it makes my heart flutter everytime. Both bands are regular visitors so the repertoire is familiar. The Doctor’s set list may even have been nearly identical to their last visit in the summer, but they never sound quite the same and they get more free and playful every time we see them. 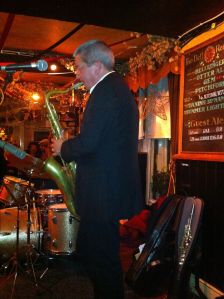 Andy Sheppard was on fine form. In his other bands playing so quietly that you can hear the clatter of the keys above his breath is regularly deployed effect – doing it in the Bell in contrast to some of the more furious organ trio numbers in the loud and shouty Bell was riveting (and provided one of the week’s more bizzare moments as one somewhat ‘out of it’ punter was inspired to lurch in front of the tiny stage and declaim loudly his sorrow at the passing of Ravi Shankar).  The drummers of both bands provided more of the nominations for musical moments (no cheap jokes about drummers and musicians on the blog!).  Tony Orrell, endlessly inventive and diversionary is surely behind some of the more mindblowing segues and arrangements (that switch from My favourite Things to Saving all my Love for instance!) and often seems to nudge the trio of into extended codas and unexpected grooves. The electricity between Jim Barr and Clive Deamer is the pulsing heart over which the layers of intrigue and invention provided by Pete Judge and Jake McMurchie define GTBs sound. Seeing both both bands side by side, contrasting as they are, made a couple of simple truths clear. Their music is carefully and skillfully constructed, but what makes them both such an exciting and moving experience live is the empathy and understanding in the group and the sense that the unexpected can and does happen; they’re all fantastic improvisers.