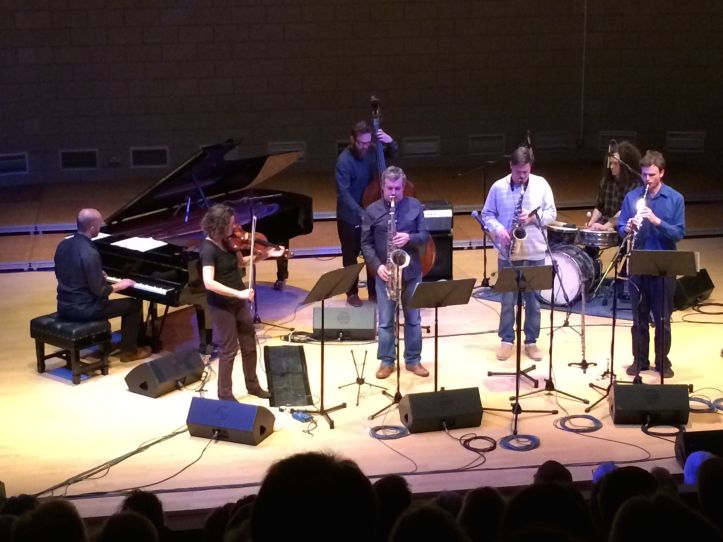 Fragments of a familiar melody appeared and then evaporated at the end of a piece that was all insistent, chattering rhythms from different sections of the septet, overlayed by flowing melodic lines and fiery soloing from the consistently exciting Finn Peters on alto  and peerless, always individual Liam Noble on piano; “… ahh, its Caravan..” . Composer, arranger, saxophonist and leader Mark Lockheart  confirmed it for us with a wry smile and “that started life as ..” a phrase used more than once in the evening.

Ellington in Anticipation is transparently born out of Lockheart’s lifelong immersion in, love of and intensely personal response to the music of one of the twentieth centuries greatest composers and bandleaders. The success of  his own re-imagining of many of the classics and the performance of them  by a fantastic band as well as originals inspired by the master has been widely recognised. The CD topped many critics ‘best of 2013’ lists and they are short listed for a Parliamentary Jazz Award. The chance to catch a live performance at the Wiltshire Music Centre was one not be missed, a decision shared by a healthy audience on the night. The new sound system there and investment in managing the lively acoustic of the hall has really paid off with a really good balance and presence everywhere in the hall that makes gigs like this a great prospect.

Having launched the evening with It don’t mean a thing if it aint got that swing re  – worked with a rolling African flavoured groove under it and that desconstruction of Caravan, the eclectic references continued. Satin Doll became Jungle Lady with more urgent rhythms in an endless flow from Seb Rochford‘s deceptively minimal kit and James Allsopp‘s clarinet solo upping the excitement levels. Come Sunday slowed the pace, the hymn-like vibe there but with as many folk like inflections as gospelly ones in Lockheart’s reading of the familiar melody.   The arranging was unfailing inventive and evocative. Viola player Magrit Hasler was frequently given lines that doubled the piano’s right hand or Allsopp’s bass clarinet locked with Tom Herbert‘s propulsive bass creating unususal textures and sounds that  nevertheless somehow conjured up the atmosphere of the Ellington Orchestra.

If at the halfway mark we were savouring the beautiful music but were wishing they’d just let rip a bit more, this was a line-up of some of the most creative and incendiary improvisers on the current scene after all, then in the second set they certainly stretched out. A dazzling exchange between Mark Lockheart and Finn Peters over a driving riff was viscerally exciting; Liam Noble’s solo piano introduction to Lockheart’s composition Beautiful Man was packed with rhythmic and melodic ideas explored and developed with alternating cascades of notes and two fisted percussive playing.

This was an evening of music making of the highest order, unquestionably a celebration of Ellington’s music and influence. If he’d been there he’d surely have been elbowing Liam Noble out of the way to get stuck in.