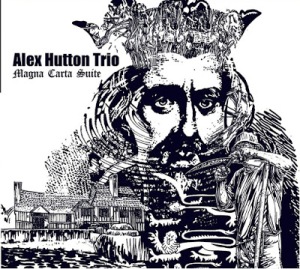 Suite? Concept Album?  Whatever the tag, history since  the Magna Carta represented in music is both a connecting thread and an ambitious idea for this new album from pianist and composer Alex Hutton.  Consciously referencing musical styles down the ages, and drawing inspiration from historical events and movements over the last 800 years turns out, in Hutton’s hands, to be no dry technical exercise but to result in a compelling collection of twelve pieces . Checking in at just under 40 minutes, it’s a set packed with distilled musical ideas and yet with plenty of space for the trio to stretch out. Its a little triumph. As well as adding Cor Anglais, played by Liesbeth Allart and Liz Palmer on Baroque flute  on some tracks for this album, Hutton’s core trio do the heavy musical lifting and what a trio. The virtuosic and ever versatile Yuri Goloubev is in the bass chair and percussive magician  Asaf Sirkis at the kit.  Old Yew sets the scene with an elegant, stately melody from Gloubev’s singing arco bass. Plaintive folk tunes and lively jigs follow as King John’s Hunting Lodge and June 15th 2015 mark out the history. Three longer pieces at the heart of the album give the trio more scope to explore. Gutenburg Press has a gently funky groove under a baroque style harmonic progression and Goloubev is at his fluent melodic best with a singing solo and Hutton matching him with a fluid response, full of evolving ideas and swooping phrases.  Gunpowder and Compass, based on Bach a fugue, is infused with urgent rhythms and and a workout for Sirkis, goaded on by insistent repeated notes from Hutton and Goloubev. Self Made Man’s self declared romanticism evokes more sweet lyricism from bass and piano. The final section, with Neil Sparkes declaiming his poetry over the bands’ accompaniment may be more of a ‘marmite’ element for listeners, but adds another dimension.  This compact set has plenty of promise for a thrilling live performance but the recorded set stands on its own and has already wormed its way into my playlist for the summer.