I’m still catching up with 2016’s recorded largesse as 2017 rolls on. These two excellent albums  are wildly different but give a flavour of the diverse creativity honed and unleashed by now well established jazz programmes at top music colleges. Drummer Silk hails from Scotland originally but went to Birmingham, whilst pianist  Dominic Marshall went to Leeds before migrating to Holland for further study.

Marshall’s latest recording Triolithic, released towards the end of last year, finds him

reunited for half the dozen tracks with fellow Leeds alumni Sam Vicary on bass and Sam Gardner on drums.  The rest are recorded with regular collaborator Jamie Peet on drums and Glenn Gaddum Jr on bass.   There are plenty sources of inspiration blended into Marshall’s playing and writing but the lodestar is the blending of melodic lines, jazz drenched harmony, fluid improvising and the beats of hiphop.  It’s territory he’s been exploring for a while, but this collection has the assured feel of an artist confident in his own voice. A liquid groove may never be far away but different atmosphere’s are conjured up with a playful hook from the synth on 80 Campbell Road, a dark modal work out on Deku Street with Jarret-like spiraling invention. Blue Lotus takes off with dazzling counterpoint.  The pieces evolve and the developments suggest little stories.  This is music that draws on influences and makes something fresh from them. 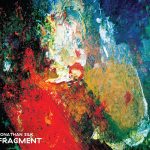 Jonthan Silk‘s Fragment is another set of original music, but using an altogether different palette.  Silk has written for a big band augmented by a 13 piece string section. He’s put his studies with Vince Mendoza and Maria Schneider to  good use creating sweeping, dynamic pieces. Some, like Introduction, Prelude, Reflection are very short setting us up for more prolonged development. After swelling strings, the trumpet entrance on Introduction is a catch the breath moment before Buchaille kicks in, layers build up and solos swoop over stabbing interjections from the ensemble. The title track Fragment  is high octane, burning improv over a rocky clatter. Fool’s Paradise’s succession of episodes uses the full range of the the band building to a climax, the trumpet section soaring over a clamorous sax solo before calm descends.  There’s some glorious playing from individuals and the whole ensemble. This is a notable achievement and too many strings to count added to the bow of Birmingham’s Stoney Lane Records who put this one out.

If 2017’s crop of recordings produces many like these two, it will be a very good year.