By my standards, it’s been an intense run of gigs over the last week with a couple of warm-ups before diving into the Cheltenham Jazz Festival.  As a result, this post follows my bloglet rules which were spontaneously invented a couple of months ago.  I describe a special moment in a gig which, for me,  captured its essence rather than write about the whole gig.

Even though the delights of Cheltenham were round the corner, it seemed impossible to 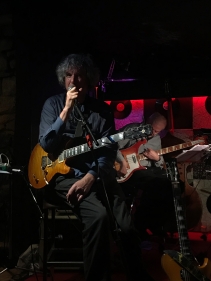 forgo the chance of catching the visit of John Etheridge to the regular Wine Vaults session last Thursday.  The moment came early in the gig. I arrived as the band launched into a calypso flavoured,  infectiously jaunty piece and Etheridge, after a brief panic over a temperamental lead, launched into the theme and his solos. As the groove intensified, he waved for Vyv Hope-Scott on keys and Wade Edwards on bass to stop and turned to face Trevor Davies on the drums. It’s not often Trevor gets the lime-light, but it’s noticeable how often the trio’s visitors acknowledge and appreciate him. There’s something about his time and groove that they recognise.  Etheridge heard it and, for what was not to be the only time of the evening, traded phrases and surfed on the rhythms coming his way.   It was a special evening, Etheridge is a great raconteur and entertainer and the music spanned his interests from rocky blues and country to jazz and a Jimi Hendrix tribute to finish. That  moment with Trevor stands out though.

from Azhaar Saffar‘s Global Wave.  Singer and violinist Azhaar is back from some fairly extensive travels in Latin America following years touring with Sirius B. Global Wave are her new project playing originals firmly located in latin territory, all captured on the album Original Love.  The band are a fantastic unit, really digging into the grooves. With Jim Blomfield on keys and Guillaume Ottaviani on bass, a locked away, danceable pulse is a certainty. There were many great moments in the evening, one stands out courtesy of drums and percussion. The tune Songlines started with a drum feature from Paolo Adamo. Beaters conjured atmospheres from the toms and gradually a pulse emerged. It was the interplay with percussionist Ivan Moreno that really started things fizzing. An utterly infections and engaging momentum developed.  That partnership stood out all evening – multiple moments perhaps.  As we headed for home, still feeling the music in our veins, I was reflecting that some great music was ahead of us at Cheltenham, I did wonder if I’d have quite as much fun as this though.