A slightly unheralded trip to London meant suddenly, we could take advantage of the dizzying choice of gigs on a Friday night.  It seemed almost wrong to miss this one given the opportunity.  John Cummings (I think it was he, he didn’t introduce himself) of Serious popped onto the stage at the appointed hour, declared the Branford Marsalis Quartet to be the best acoustic jazz outfit on the planet, then introduced Nikki Yeoh to do a solo piano set as support. No pressure there for anyone.

Yeoh proceeded to engage and charm the hall with anecdote and badinage, embellishments on a brief set that showcased her always affecting, exuberant and occasionally riotous writing and playing.    Little Bears was an epic of story-telling, a dancing theme, percussive clusters and elbows on the piano presaging a lyrical resolution. Elderflower and Ivy was an elegy, tenderly rendered. The whole hall seemed to lean forward in their seats. A clattering finale with BeBop and a bit of gratuitous audience participation stirred everyone up.  It was a fine set. 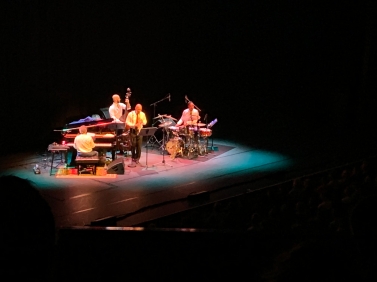 The Marsalis Quartet with Joey Calderazzo on piano and Eric Revis on bass, have been a unit for more than two decades. Justin Faulkner on drums the most recent addition, has been with them for ten years.  Muiscally, they are tightly bonded unit. They strolled onto the Barbican stage, suited and booted, and proceeded to tear the place down. The Revis composition with which they started, Dance of the Evil Toys was a bubbling frenzy of bass-line, seething drums and piano clusters, Marsalis hurling his sax into the maelstrom, waves of sound breaking and pinning us to our seats.  After the blitzkrieg,  Cianna, was a stately tango, all finesse and sculpted melody.  Andrew Hill’s Snake Hip Waltz was a recipe for more free-wheeling invention. Light Filtering from Water Flowers evoked a dizzyingly rhapsodic solo flight from Calderazzo before Revis and Faulkner re-joined to give the episode even more air beneath its wings.

This band, like the very best (Wayne Shorter’s quartet anyone?), seem to be able to do anything, never lose contact with each other, meaning the maelstrom can switch to the calm centre in the blink of an eye, and convey the sense that almost anything could happen.  Marsalis sometimes seemed to set things off then withdraw, sitting at the back of the stage while the band take flight, before stepping back in when to join the fray.  Calderazzo and Faulkner particularly seem to pulse with barely contained energy. When a drum solo erupted in the finale, Jarrett’s The Windup, it was as if the storm had broken.

Calculus of best or most ‘this or that’ are not very meaningful, so we can take John Cummings’ introduction as forgivable, generous hyperbole.  This band though, are anchored firmly in the rich history and language of pretty much everything in the canon tagged jazz, and a fair bit more besides no doubt, and are an exhilarating experience live as the play with and reshape their current set of selections and inventions in front of the audience.  I’m glad we didn’t miss this all too rare flying visit.